Not really into politics today. Responded to a few pro-gun folks at the PS site. Heart's not in it, though. Built a new raised bed in my lawn over the weekend. It's a long process because I don't want to spring for the amount of soil necessary to fill a 4' x 8' by 10 inches deep bed. This is my method and it has evolved a bit or I'm just getting better. 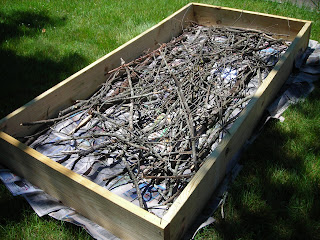 I start by wetting newspaper and putting down a nice thick layer for a weedblock. It saves taking the paper to the recycle, too. Ink is soy-based now so hopefully not too lethal to Mother Earth. I put some saved branches from the brush-pile on top of the paper. I could put them by the road for the village to take, but why let them go to waste. The birds will miss them in the brush-pile, though. It's kind of a variant on hugelkultur. 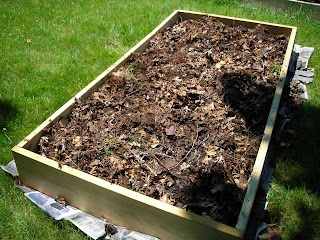 And yes, I still have a shit-ton of leaves saved from last fall itching to be put to use. They go on top of the branches. There are lots of earthworms and other small critters amongst them to turn leaves and branches into soil. 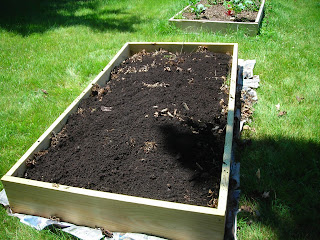 Fortunately, I had a few bags of topsoil laying around to top it. It has been planted with crimson clover now and watered and mulched with a little chopped straw. 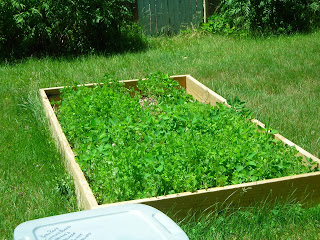 This is a bed I built earlier in the Spring. I guess that would be, in the Spring, since we've moved past the solstice now. It has clover and a small assortment of weeds growing in it. In a bit, I'll throw another layer of leaves on it and then either mulch it good or another cover crop. These two will be ready for planting at least by next Spring. I'll make one more this Summer. That'll give me six of them in the yard. Also have two at the community garden. I believe I'll give up one of those next year. It's not far away, but father than the backyard. 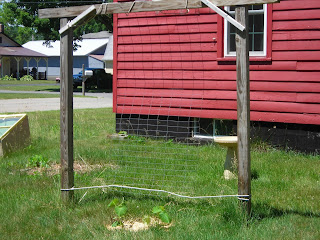 Two cukes stretching for the trellis. Looking forward to pickles. Hoping to naturally ferment them for all that pro-biotic goodness. 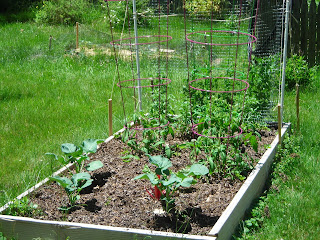 This is a planted bed with three broccoli, three tomato, three Thai pepper, one Swiss chard and snap peas growing up the trellis at the far end. Snap peas are wonderful. No shelling required. Swiss chard magically grows back after every harvest. Looking forward to everything else.

This was posted at the Fort Edward Community Garden FB page. Really love the picture. I'll get there someday.

Posted by Kevin Robbins at 1:56 PM

Labels: The Garden of Kevin