Since I've decided to turn Hometown into a cult of personality blog, it's important that any unsuspecting victims who wander through here are aware of the what and why of my diet. We're all narcissists now anyway, otherwise Twitter and selfies would not exist. Would they?

For the past 3 months, I've been subsisting (well, apparently, since I've lost only 7 pounds) on a, 99% of the time, vegetarian diet. Initially the reason was to lose weight and 7 pounds is better than nothing. But, this is an inactive time of the year and that was mostly during the cookie season. So many cookies between Thanksgiving and New Years! So we'll see how it works out when the freezin' season is over and gardening begins. Aside from wanting to appear buff for the beach this Summer there are health considerations. With that in mind I'll throw in a plug for Forks Over Knives, a DVD full of vegan propaganda, if you'd like some convincing of the health benefits. I love to eat meat. Bill Clinton Loves to eat meat. If Bill and I can do it, anyone can become an herbivore. But don't think just of yourself, or in this case myself, since this is my cult here.

You don't have to have the sensibilities of a PETA devotee to appreciate that animals raised for food in this country don't have the best lives. Bluntly stated, they're tortured from birth to death. Buster's Law does not apply to them. I've known that for a long time, but have happily rejected the cognitive dissonance. Admittedly this was not my overriding reason for the change in diet, though, and I'm not going to try to shame anyone into giving up meat. And besides, those animals are getting their revenge through the saturated fat, hormones and antibiotics you're ingesting. So, rather than harp on how cruel we are to these creatures, I'll get back to why it's important for you, my "follower," to abstain.

I want to live in a country and a world that's not polluted beyond hope of renewal. I've moved beyond the urge to copy and paste large swathes of the internet and basically claim it as terra incognita. So, just go to the link. In short, as your beloved leader, I implore you to make this planet healthier for me and for yourselves as well. 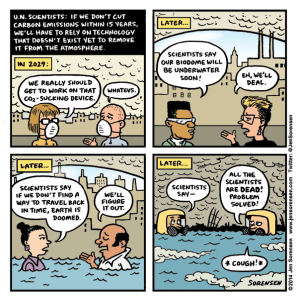 Where I Live and How (or Blame It On Henry)

Like many others of my generation, my development was warped by the lunatic ramblings of Henry Thoreau. Simplify, he said. And I listened. It's been over a year since I quit my job and entered an early "retirement." Since the sound of that word can be grating for so many reasons, I'm going with  the oh-so-more mellifluous " jubilación." Every word is sweeter when spoken with Romance speaker would.

Thoreau had it easy. All he had to do was find a bit of land to squat on and build a cabin. I bought a house 8 months ago. If Henry had had to get a mortgage, he'd have couchsurfing at Emerson's place. Lucky I saved. They take a dim view of that squatting thing nowadays. I did build a cabin shed for my garden tools and mower. His was likely larger, but I have a house and he was probably a better carpenter.

One of my goals for my jubilación is to develop new skills. Admittedly, I did have a contractor do the renovation on the bathroom. My criterion for making the effort to acquire a new ability is whether I'll use it on a regular basis. I don't plan on doing a lot of plumbing, so why learn it? Seeing a need for curtains in my new house led me to purchase a sewing machine, though. I have finished window treatments (as we pros say) for my bedroom and living room so far. It may have been more economical to have bought them, but I want slipcovers once my sewing proficiency improves. Furniture from the Salvation Army is comfortable enough, but not always attractive.

This year I learn to garden, as well. Got a late start in 2013. At the end of the summer, I did get several frames built for raised beds and a few cold frames. Have amassed a huge pile of leaves for compost. What I've noticed is that during the Summer there's a lot of grass trimmings, but no leaves to combine for good decomposition. In the Autumn, there are leaves and no grass. This year it's all coming together and I put Thoreau's beans to shame.

Like most people affected by the winter, I'm hunkering down and waiting for Persephone to come and bring Spring (and farmer's markets) back to us mortals. Enjoy the rhythm of the Winter while it's still around and try to avoid quiet desperation. Be well.
Posted by Kevin Robbins at 1:17 PM No comments:

Live Free or Get High

It's a little to the east of Hometown, but just gotta give a thumb's up to the legislature in New Hampshire.

The New Hampshire House of Representatives became the first U.S. legislative body to vote in favor of legalizing marijuana for recreational use. The measure passed a preliminary vote by 170-162 on Wednesday; it now heads to committee and then goes back to the House floor for a final vote before heading to the state Senate.

The bad news is:

The state Senate, however, has a conservative record on marijuana legislation votes: Last year, it rejected a bill that sought to decriminalize the possession of small amounts of marijuana, the fourth time it has done so in the past five years.

What's more, New Hampshire Governor Maggie Hassan, a Democrat, told local ABC affiliate WMUR-TV on Monday that she would veto the recreational marijuana bill if it ever reached her desk.

You're definitely a buzzkill, Maggie. You're just like your ma and pa.
Posted by Kevin Robbins at 1:53 PM 3 comments: