Please excuse the excessive use of exclamation points but I couldn't be happier that our Commie Nihilist coalition of supervisors has pushed through Agenda 21 here in our neck of the woods.

Tea party-backed anti-Agenda 21 legislation that would have barred Washington County from participating in state-level land-use and planning initiatives died Monday in a joint county committee meeting.

It won't be long now before we are all boarding the boxcars on our way to urban ghettoes paradise.

Believers of the Agenda 21 conspiracy theory see a world where rural Americans are stripped of their lands and loaded on trains destined for urban living centers in the name of environmental protection.

Once again we have beaten back the best efforts of the Birchers to reveal the true nature of the menace the American society faces like fluoride in our drinking water. Only their society and we nihilists know that that is what actually caused the US to become a bunch of latte-sipping, arugula-eating Obama voters. Happy fuckin' Earth Day, Birchers! (had one left over from the post title).

The county tea party and regional John Birch Society have been pushing the local legislation based on growing fears among the political right-wing that state programs, including Gov. Andrew Cuomo’s Greener, Cleaner Jobs Initiative, is somehow part of a one-world socialist government takeover orchestrated by the United Nations with the help of the news media and environmental scientists.

And happy Earth Day, Dana Haff and the nuts in Hartford who elected him.

Hartford Supervisor Dana Haff’s proposed legislation that would have essentially stood as a blanket rejection of Cuomo’s green jobs proposal and other statewide environmental land-use initiatives, including any grant money for bike paths and green business development that may stem from the state programs, saw no support from county supervisors.

Hell no, we won't take money from Albany for bike paths and green business development.

The legislation couldn’t even reach the floor because there was no “second” by members of the county committee, a required step in general parliamentary process for a resolution’s consideration.

OK, maybe just a little money.
Posted by Kevin Robbins at 10:19 AM 3 comments:

The photos look like something from Asimov's science fiction magazine. If you thought your vertical gardening efforts were impressive, here's a view of some farmscrapers: 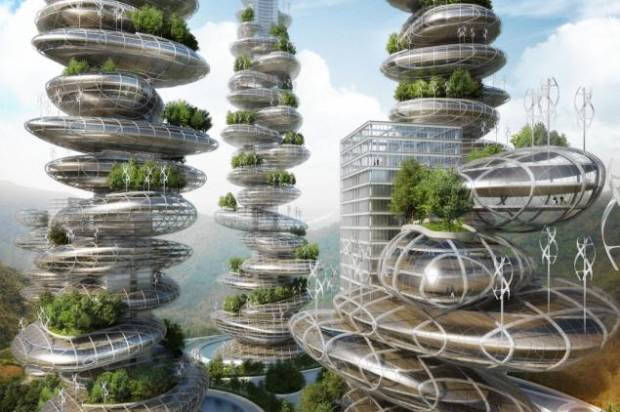 And yes, they're being constructed in China.

﻿“Farmscraper” is the term they invented for a plan of six skyscrapers, deemed “Asian Cairns,” created for Shenzhen province in China. The towering structures are divided into ovular, blob-like sections that look like rocks smoothed by years in running water. Each blob plays host to a miniature forest of trees and grass, along with wind turbines and solar cells.

Good luck to them and I hope that someday the US will move away from making better drones, missiles, etc. and toward technology more practical fro improving the planet and our species. As for me, back to the vertical garden and raised beds.

Labels: Look on the bright side, Welcoming our Chinese overlords

In some good news for my region of the country, it seems that we are not afflicted by the Bible-thumping, God-bothering types that infest other areas.

The Capital Region, including Saratoga County, is one of the top 10 least religious areas in the country, according to a recent Gallup poll.

The region ranked ninth on the list released last week by the international public opinion poll company — tied with Bremerton-Silverdale, Wash.; Madison, Wis.; and nearby Springfield, Mass. San Francisco, Boston and Burlington, Vt., also were listed among some of the other least religious metropolitan areas.

Well, number 9 anyway. So we have room for improvement. I am hoping that my worship of Pagan gods and goddesses isn't skewing things upward. I do so look forward to the weekly meeting of my coven.

“Northerners tend to be spiritual as opposed to religious,” said Ilene Frank, co-president at the Berith Sholom progressive reform synagogue in Troy, which has more than 150 members from the surrounding five counties. “There’s definitely been an overall decline in the number of people who use rituals in search of the divine.”

Frank, who previously lived in Texas, said this is not the case in other parts of the country.

“You wear your religion in parts of Texas,” she said.
Hmmm, that doesn't really help answer the question as to whether my Pagan worship is considered religious as far as this poll goes. I would say definitely not in Texas, though. Good to know I'll stay here in Baal's country.

In even better news: Wells Fargo has finally, as of April 1, returned my $370 after two weeks of my hounding them for it. As my mother used to tell me, "the squeaky wheel gets the grease." It wouldn't have taken her two weeks, I'm quite sure she would have grabbed someone by the throat long before that.

Say hi to Lawrence if you see him Maaa.
Posted by Kevin Robbins at 12:26 PM No comments:

Labels: Bless The Goddess, Look on the bright side

I was out walking the other day and as is my wont, I was stopping to pick up a few returnables. I am, I should say, pretty wimpy about it. If I have to walk through mud or water, or if it's dirty or been there awhile the can or bottle is staying for someone else or the forces of nature to take care of. I'm only a cheap bastard to a point. Anyway, the most interesting person I've ever met came to mind. Don't know if Reader's Digest still runs that, but they do, Lawrence is mine. Been meaning to make a copy of his obit for some time now and had neglected it. Some people do grave rubbings, I collect obits of people I know. So, courtesy of the Glens Falls Post Star:


QUEENSBURY - Lawrence "June" Millington Jr., 65, of Queensbury, passed away on Thursday, Nov. 17, 2011, at Albany Medical Center. He was born April 6, 1946 in Niskayuna, the son of the late Lawrence and Nancy Estella (Williams) Millington.

June, who was autistic, lived on his own, and was very proud of that fact. He loved spending hours listening to music, looking over maps, watching movies, sports, and doing word search puzzles. Some of his favorite games were Yahtzee, Scrabble and Dominoes, which he was able to play at the East Side Center on Maple Street since it was originally founded in 1985. He was well known for collecting bottles, which was one of his hobbies and just for the last 19 years alone, June collected approximately 3.8 million bottles off the streets of the Queensbury area, which would go around the world at least once.

One of June's favorite sayings was, "here is just a funny story to share with you." He was able to tell you what day of the week you were born on, when you told him your birthday and he never forgot a birthday or your name. Then he could proceed to tell you other famous people that were born on the same day as you, what record was released on the day, or actor played in a movie that was playing during that time period, or how many different songs your name was in and sung by what artist. His knowledge base in the entertainment genre alone was mind boggling. And he could bring up all that information faster than you could google it.

Survivors include his sister, Sally Wallace of Chestertown; his brother, Paul Millington and his wife, Irene, of Fort Ann; eight nephews and nieces; and seven grandnephew and nieces.

Those who wish may make online condolences by visiting www.sbfuneralhome.com.

I think it was the first time I met him that he asked me when I was born and then proceeded to tell me that it was on a Tuesday. So, to him, I was then a green-eyed Tuesday's child. I wouldn't be surprised if he knew the exact number of cans and bottles he had picked up. Not mentioned in the obit is that he also could tell you the zip code of any town in NY and knew all the route numbers as well.

Hope you're in a good place Lawrence.
Posted by Kevin Robbins at 12:06 PM No comments: