I’m responding to Kim Gamache writing, “The Democrats opened a Pandora’s Box.” If a Democrat is elected president in 2020, how long before impeachment proceedings begin?” And, “There is an election in less than a year. Let the people decide.” On the latter, I have to point out that’s the election President Trump was trying to get Ukraine to influence by extorting them over aid. On the former, even the RNC realizes the House is going to stay Democratic. And by voting to condone Trump’s actions Republicans are saying it’s okay to ask foreign governments to conduct cyberespionage and make up “dirt.” That includes Rep. Stefanik when she inevitably votes with the rest of her party. If there’s a President Warren running for re-election in 2024 and wants any sort of assistance from any country against say, Nikki Haley or Tom Cotton it’s no problem. Hacked e-mails or texts. Bogus investigations begun. Republicans are normalizing it by excusing Trump. Vladimir Putin is smiling and saying "Thank God, no one is accusing us of interfering in the US elections anymore; now they're accusing Ukraine."
.
I want to mention Stefanik’s standing by while her cohorts push the “Ukraine interfered” Russian intelligence operation. It’s worth remaining silent to become a “star” in the GOP. Jim Jordan remained silent at Ohio State for what Joe Paterno lost his reputation for. Jordan is a folk hero now in today’s Republican party. A vote with Trump is ignoring his going on Fox and Friends and rambling about Crowdstrike and the DNC server. Things that can only be understood by those marinating in rightwing fever swamps. Fiona Hill’s testimony, “In the course of this investigation, I would ask that you please no promote politically driven falsehoods that so clearly advance Russian interests.” Rep. Stefanik claims her party, other than the president who's adopted the Russian line, has not denied that they interfered. Trumps' defenders are certainly working overtime to muddy the water, though.

Elise Stefanik has voted to strike down the Affordable Care Act and defund Planned Parenthood. Her disregard for protecting our environment, or the deception she engaged in when she was allowed to vote against Trump’s Tax cuts in exchange for whipping the votes for its passing, a bill that benefited corporations and the 1%, her donors, not her constituents, or her numerous other assaults against labor, education and our financial and investment protections are available for anyone with a bit of curiosity to see by visiting the “Tracking the United States Congress” website. For her fans, the truth may be painful.


I really love this line.

Since when has corruption been quantified in acceptable amounts?

Perhaps an analogy will persuade those who are so blind they will not see. One day I look and see my neighbor (for the sake of argument say we don't get along) digging in his backyard and burying a large heavy object. Also, his wife has gone missing. I call the police because something seems fishy. (I am the whistleblower.) Two police detectives begin to investigate my tip. One is my friend, one my neighbor's. (That is the congressional inquiry.) They talk to my neighbor. He says his wife is visiting relatives, and he was doing some gardening. (Trump and his "perfect" phone call.)

"Elise is paying a smirking misogynist slime-ball to stalk Tedra Cobb!," she tells Pinocchio. "I've seen the creep's Twitter feed. He's very pleased with himself. He never removes his sunshades. Is the law after him? What is he hiding? No woman feels safe with a guy like that following her."

Posted by Kevin Robbins at 1:36 PM No comments: 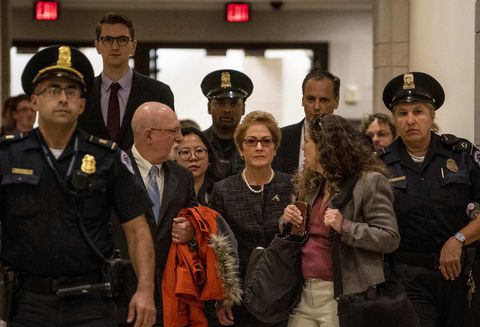 Posted by Kevin Robbins at 10:29 AM No comments: