Christians in Name Only

Not that I agree with Russell Moore on much of anything. But, when you're right, you're right.

While deeply conservative on traditionally religious issues such as abortion, gay marriage and religious freedom, Moore was one of the few prominent evangelicals this election season to remain an outspoken critic of Donald Trump throughout the presidential campaign. He challenged the candidate on issues that seemed fairly obvious to any practicing Christian (the serial lying, immoral business practices, questionable sexual ethics, etc.) in surprising contrast to many others on the religious right who ignored or even made excuses for the candidate’s behavior.

The cognitive dissonance that's going to have to take place within the heads of any true Christian over the next 4 years will make their eyes spin like Linda Blair's.

The criticism being leveled at Moore by his religious counterparts says more about what the evangelical establishment mistakenly values today than it does about anything that Moore has done wrong. And it misunderstands the true role that Christians could — and should — play in the public square under a president who is likely to be dismissive of their cause.

These Christians leveling criticism at him might want to take a look at the Sanhedrin.

Really, what the majority of Moore’s statements have in common (apart from being, well, correct — at least according to traditional, values-first Christian teaching) is that they might offend those being criticized, the president-elect included. That, in turn, might result in — gasp — a loss of political power.

But where Christian leaders should be seeking influence, especially in a rapidly secularizing society in which their views seem ever more countercultural, is in trying to remain a respected moral voice worth engaging with — not by setting aside their most distinctive values in a grab for shifting political power. The most persuasive religious leaders will be those who, like Russell Moore, remain distinguishable from everyone else. Attacking the most principled among themselves is an attack on Christians’ best chance for survival in the public square. 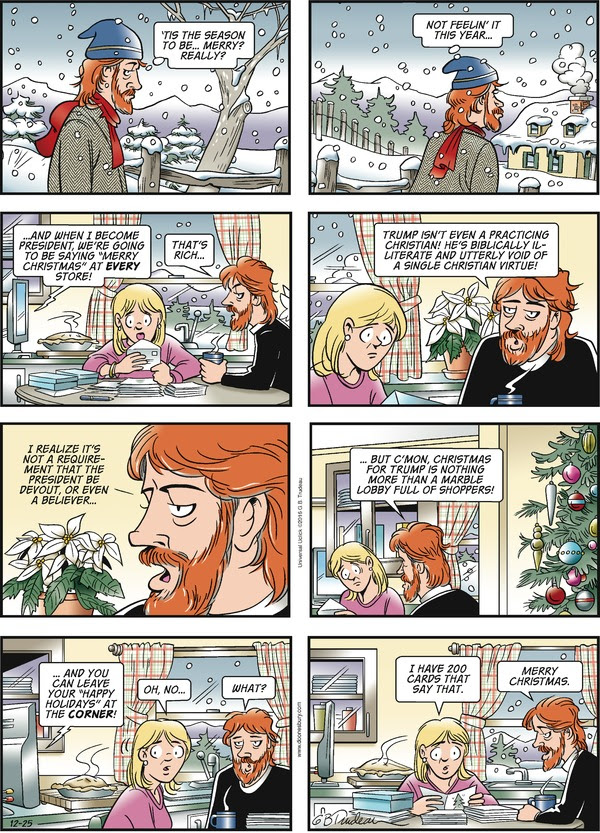 Wanted to mention this as well.

“Currently, my guys say we are going to be able to put together about 200 people to participate in the march, which will be against Jews, Jewish businesses and everyone who supports either.

I don't expect to see the prez elect Tweeting about that anytime soon. He seems more interested in Jewish settlements in Palestinian areas than in Montana.