Gallup Not Aware That Democrats = Republicans

Yes, it's shocking that a "reputable" polling organization like Gallup could make this huge mistake. This is definitely a sampling error of some sort. 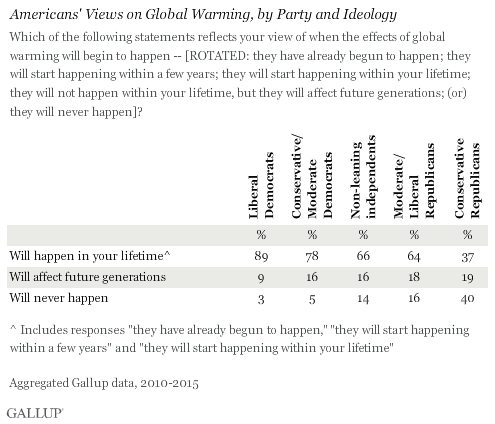 There's also no indication of where Greens stand on the issue. I'm still trying to discover that myself. In other Democrat/Republican hybrid news: Lincoln Chafee is running for president as a Democrat. I'm definitely looking forward to hearing what he has to say.

Unlike Webb, who ran as an antiwar candidate at a time when Democrats had already turned on Iraq, Chafee was one of only seven Republicans who voted against authorizing the Iraq invasion that Clinton supported. “It just wasn’t evident that Saddam was a threat,” he says, bothered still. “It was all talk. And now we live with the ramifications.”


In fact, despite enormous pressure, Chafee opposed virtually the entire Bush agenda in the Senate, including tax cuts for the wealthy. He is an ardent environmentalist (his father, Sen. John Chafee, was a hero of the movement), and he endorsed Obama twice.

Is it any wonder he's no longer a Republican, unless you are afflicted with Funiciello Syndrome.
Posted by Kevin Robbins at 12:18 PM