So, Benjamin Netanyahu is addressing Congress to tell them that we really need to get on with a war against Iran. And oops.

A secret cable obtained by Al Jazeera's Investigative Unit reveals that Mossad sent a top-secret cable to South Africa on October 22, 2012 that laid out a "bottom line" assessment of Iran's nuclear work.

Damn meddling kids! Turns out that Mossad had a different analysis of the Iranian nuclear threat than Ben did.

It appears to contradict the picture painted by Netanyahu of Tehran racing towards acquisition of a nuclear bomb.

And it's not just Mossad.

That view tracks with the 2012 US National Intelligence estimate, which found no evidence that Iran had thus far taken a decision to use its nuclear infrastructure to build a weapon, or that it had revived efforts to research warhead design that the US said had been shelved in 2003.

Media reports and public comments by senior current and former officials have frequently indicated dissent from within Israel's security services over Netanyahu's alarmist messaging on Iran.

Gee, I hope this doesn't hurt him in the election. Oh well, he can always get a job on Fox News. It's funny that his analysis of the threat would be less than accurate, seeing how hard he worked on the chart displaying the threat. 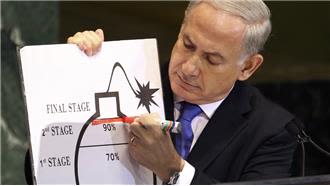 The timing with the election is kind of coincidental, I'm sure. Since I know nothing about the election, I went to the liberal media to get information.

The probability of a left government is not particularly high, yet it still exists. Such a regime would clearly mean a shift in policy, but not as big of a shift as some may think.

That's not too heartening. They have nearly as many running as the Republicans do for the chance to lose to Hillary. A little more diversity, tho.

The current government was formed by a coalition of center-right parties, in contrast to the right-Haredi coalition who ruled before. However, the coming election might put an end to the Netanyahu regime, which has been in power since 2009. The alternative to Netanyahu is the political coupleIssac Hertzog and Tzipi Livni. Together, they lead the Zionist Camp alliance and aim to bring the Labor party back to power for the first time since 2001. Do they have a chance? The polls suggests a complicated answer.

And, I've already killed the lede. With the election coming up, it seems odd for the prime minister of Israel to pick a fight with the president of the US. I had someone tell me this is good for him. Combined with hyping the threat from Iran, I don't see that.

Tuesday night Obama's national security adviser, Susan Rice, told Charlie Rose that Netanyahu has injected partisan politics into the US Israeli relationship and that the prime minister's March 3 speech is “destructive to the fabric of the relationship” between the two countries.

Rarely if ever has a US official been so harsh in public about an Israeli leader. Her comments prompted Tufts University Prof. Daniel Drezner to describe the effect of the planned speech as “toxic.” Of Rice's comments, he said: “I’m pretty sure that if you’re an Israeli foreign policy principal, those are not the words you want to hear coming out of a White House official’s mouth.”

“The prime minister was profoundly forward-leaning and outspoken about the importance of invading Iraq,” Kerry told the House Foreign Affairs Committee. “His judgment might just not be correct” in the case of Iran.

Yeah, I know. I might as well have just copy and pasted the whole thing like Donald would. The stunning conclusion is some classic Netanyahu.

Kerry's own record of judgment on the Iraq war is not exactly spotless, since as a senator in 2002 he voted to authorize it. But he was referring to Netanyahu’s spectacularly bad judgment on that war, encapsulated in a September 2002 speech the Israeli leader delivered to Congress, urging them to support the invasion of that country.
“There is no question whatsoever that Saddam is seeking and is working and is advancing towards the development of nuclear weapons. No question whatsoever,” Netanyahu said then. “Today the United States must destroy the (Iraqi) regime because a nuclear-armed Saddam will place the security of our entire world at risk. And make no mistake about it – if and once Saddam has nuclear weapons, it is only a matter of time before those weapons will be used.”
He went on to say that a US war on Iraq with broad international support at the United Nations would be best, but absent that support the US “must be prepared to act without it.”
The US invaded that March, and found that Saddam Hussein’s nuclear weapons program had ended in 1991.The fallout from that war continues to be felt in the region.
Posted by Kevin Robbins at 4:10 PM