I suppose I should show the cartoon first. Leave now if you're easily shocked. Don't say I didn't warn you. 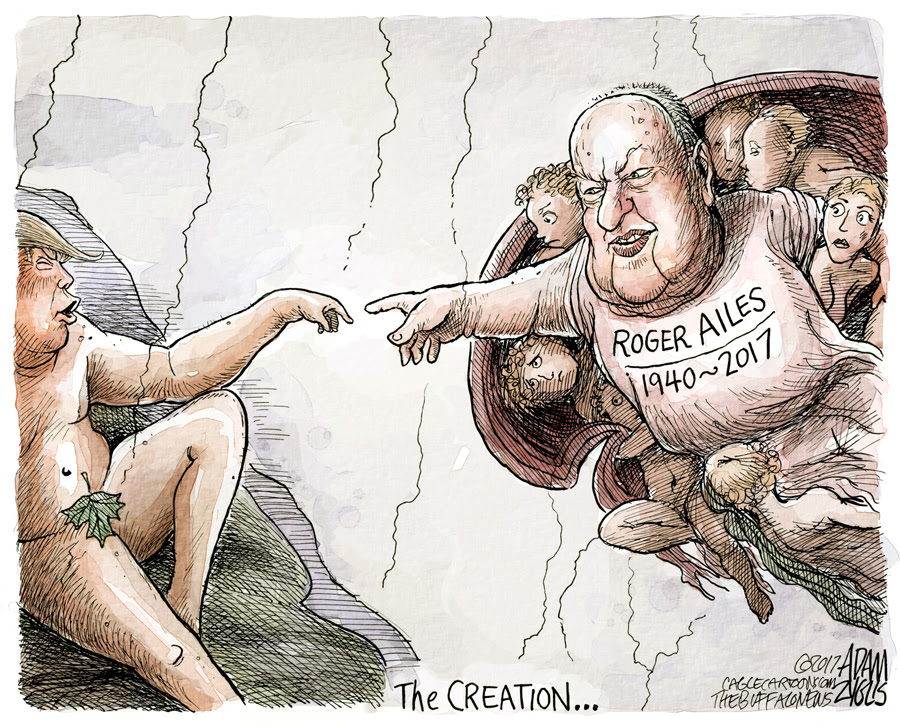 On to the upstate NY blue noses. First up, Dean Pickett.

The illustration in Saturday, May 20 Viewpoints was not fit for publication in any local paper that minors read. It is disgusting pornography designed to denigrate our president and in turn every citizen in this country. It is beneath the moral integrity of your publication and most of your subscribers.

Second is an old favorite in Hometown, John Siebrecht. Such a favorite that his last name didn't even upset the spell check. Kudos John.

Boo to The Post-Star for the outrageous "cartoon" of our president wearing only a leaf and depicted as a lazy pervert touching hands with the just recently departed Roger Ailes. Roger Ailes, a colleague of yours, is also naked with frightened children scattered about. One such child is down around Mr. Ailes’ waist, with only the back of his head visible.

I've been trying with some success to limit my LTTEs. There is only so much stupidity I can stand, though.

I'm writing in response to the two letters about the editorial cartoon, "The Creation ..." Dean Pickett says, "It is disgusting pornography designed to denigrate our president and in turn every citizen in the country." The cartoon was obviously inspired by "The Creation of Adam" which graces the ceiling of the Sistine Chapel. Maybe it has been described as "disgusting pornography," but probably not often. Personally, I didn't feel denigrated. But then, I've been called a nihilist.
John Siebrecht writes, "our president wearing only a leaf and depicted as a lazy pervert touching hands with ... Roger Ailes." It's hard to believe anyone ever looked at the original and opined that Adam was being portrayed as a "lazy pervert." Michelangelo didn't even cover him with a fig leaf. Creation, then Tree of Knowledge, then fig leaf; the rest is history. Ailes as God is the truly disturbing part. Mr. Siebrecht is also upset about the position of one "child" (the age is nebulous). I'll recommend an article, "6More Women Allege That Roger Ailes Sexually Harassed Them." It's online in New York Magazine. One of them was 16 at the time. At least he didn't draw smutty cartoons for the Post Star.
The point of the editorializing was that Ailes is responsible for the Trump presidency. He was a right wing propagandist with no regard for journalism. I doubt any folks at the Post Star would claim him as a colleague, as Siebrecht suggests. Anyone upset by this drawing should probably leave the kids home if they visit the Vatican. The art it's based on is more explicit and much more realistic.

Yes, you dear online reader get a link. If the cartoon shocked you, Ailes' behavior will be way beyond the pale, I'm afraid.
Posted by Kevin Robbins at 12:34 PM