Wanted to go through some of the "proof" Matt and Tony have for a conspiracy. There is no theory. So, that's conspiracy anomalies. Screw Loose Change is a fantastic resource for this loony shit.

The cockpit door on flight 77 was never opened according to sensors and local 9/11 Truth experts. So, that should prove no hijacking took place. No word, of course, on the other 3 flights.

The data show that nobody opened the cockpit door on the prior 11 or so flights. Apparently the flight crew never brought in a meal to the pilots, and the pilots never had to take a leak.

So, maybe the sensor was malfunctioning? Moving on to the high level of put options. The only thing I know about the market is "invest in indexes and re-balance yearly." Trust me. I've done it all the wrong ways.

In actuality, if someone wanted to make money of the attacks, the best way would not be to buy puts in the companies involved, but to short the entire market, or buy oil futures. The Dow dropped over 16% in the weeks after 9/11, and buying puts on the much larger index market could have been done in larger quantities without drawing any attention, but then again the Loose Change boys couldn't put this much more complex theory into an ominous looking graphic in their movie that could be understood by their 20-something audience.

Some of their audience actually skews a little older.  From them I learned that "pull it" is a demolition term.

One of the more amusing mythologies of the 9/11 denial movement is the claim that the phrase "pull it" is an industry term for demolishing a building with explosives. This was created, of course, so that Larry Silverstein could have casually confessed to being involved in the plot during an interview with PBS. There is, however, absolutely nothing to show that this is in fact true, but that has not kept the conspiracy geeks from repeating it to themselves so many times that it self-referentially becomes widespread knowledge that the term "pull it" refers to controlled demolition.

Just for the record, a photo from SLC of Tower 7 burning. 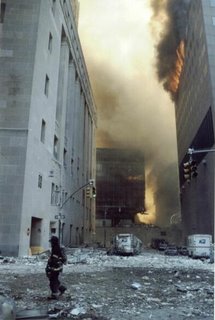 It was mentioned during the discussion that skyscrapers don't fall in 9.8 seconds. I'm not a scientist. Fortunately some people are.

If the video evidence gives such a great ranges of guesses, then maybe another approach is required, at least as a crosscheck. We tried looking at the audio of each collapse, and came up with a minimum of 14 seconds in each case (see our South Tower and North Tower pages for more), and the potential for them to have taken several seconds longer.  Calculating these times involves far too many judgement calls for us to claim proof of anything, but we do think it adds significantly more support to the 15+ seconds collapse time, and makes the 8.4 second end of the spectrum look particularly unlikely.

If you go to youtube, you can see clips of buildings being imploded and clips of the towers falling. Clearly the towers started from the top down. Implosions start from the bottom up. I'm sure that's just a clever trick to throw off the Truth tellers, tho.

What the author at SLC says here is what I've felt for some time:

They are Questioners who are not sincerely seeking Answers. I just wanted to put this clip up because it was brought up during the discussion what a "goldmine" of info the 9/11 Pilots for Truth are.

Yes, John Lear is one of the of the Pilots for Truth.

How can people actually believe this stuff? This man definitely needs help. Anyone that puts any faith in 9/11 theories needs help. Please seek it if you do.

Posted by Kevin Robbins at 3:26 PM